This dress, named "Tertulia" is designed by Karl Lagerfeld, artistic director of the Chloé house from 1966 to 1988, then from 1992 to 1997. The abstract hand-painted motifs meet the designer's personal tastes for the Arts Deco period.

This model, from Karl Lagefeld's very first collection for Chloé, notably in Marie Claire (July 1, 1966), Elle (1966) and Vogue (March 1978). It also exists in a long version in several different colours, such as orange, published in the magazine Vogue (January 1966).

However, this model is not labelled "Chloé" but "Dorothée Bis". Indeed, it was common for the shops that sold the models to change the original brand for their own. Dorothée Bis, a famous brand created in 1962 by Jacqueline and Elie Jacobson, a pioneer in ready-to-wear, sold Chloé models and other designers at the time before launching her own models. 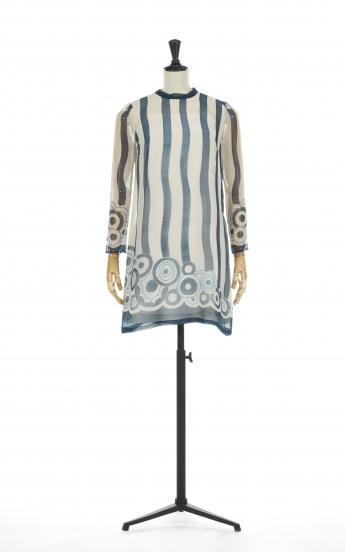