Through the Milliner's Window, Georges Lepape

Georges Lepape (1887–1971) began his art training at the Atelier Humbert in 1902, continued at the Ecole Nationale des Beaux-Arts, and showed for the first time at the Salon d'Automne in 1910. At the Salon he met Paul Poiret, then in search of an illustrator capable, like Paul Iribe in his Paul Poiret's Dresses As Seen by Paul Iribe of 1908, of creating a luxury presentation album for his collections. The result was Paul Poiret's Things…As Seen by Georges Lepape.

Lepape went on to become a leading press illustrator: between 1912 and 1925 his stencilled plates featured in every issue of the Gazette du Bon Ton and he was called on by other magazines including Femina, Vanity Fair, Harper’s Bazaar and L’Illustration. The real turning point in his career came when publisher Condé Nast asked him to work for Vogue. The study on display here – executed for Vogue – betrays the Russian influences behind the work of this precursor of the 'clear line' style, with its emphasis on areas of bright, solid colour. 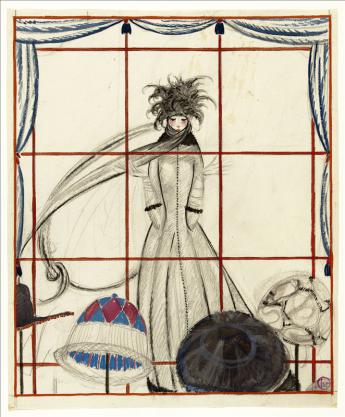