The 1997-98 spring-summer season is one of Martine Sitbon's most famous. Her tight dresses, sculpted in devoured muslin and velvet, draw tree branches, like snapshots of the undergrowth at dusk. Cut-outs run through the garment and reveal the feminine skin.

This is the case of this top and skirt ensemble in tight jersey, immortalised by Jeanloup Sieff (1933-2000) for the New York Magazine (August 1997), with three back cuts revealing the backbone at an angle. The severe front, with a high collar, does not suggest a dorsal neckline, according to a ploy that has been fashionable since the 1930s.

About this creation, Martine Sitbon confides: "I often worked on the garment as a play on contrast... A strict and structured front combined with a back open to movement, like a marriage of two extremes, a necessary asymmetry. » 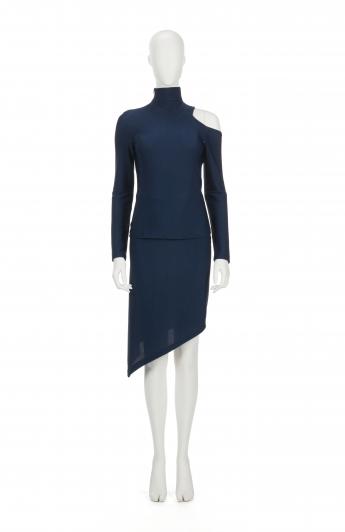