said to have belonged to Empress Eugénie

The enemies of Empress Eugénie (1826–1920) damned her as a fashion-crazed flibbertigibbet and nicknamed her 'The Rag Fairy' and 'Empress Frilly the First"; yet in fact she dressed glamorously and expensively only in order to help revive the luxury fashion industry. Generally speaking her tastes were simple, and even if she displayed an innate elegance throughout her reign, clothes for her were no more than tools – 'political outfits', she called them.

It is said that great-grandfather of the donor of this dress was Emperor Napoleon III's physician and that Empress Eugénie gave the doctor's wife this dress as a token of gratitude. The shape of the dress – for conservation reasons only the bodice is shown – indicates a date around 1873, when the former Empress was living in exile in England after the defeat by Prussia at Sedan. Few of the Empress's clothes have survived: most of them were given away during her lifetime, in imitation of the practice of the Ancien Régime, and the tragic end of imperial rule in France would hardly have been conducive to the keeping of souvenirs. 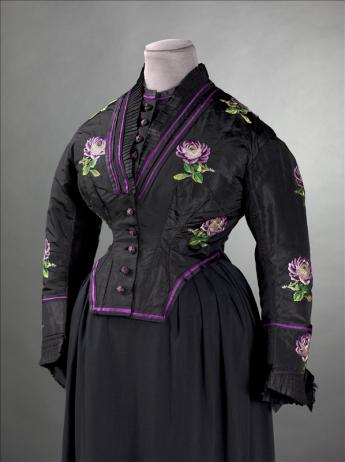