In the mid-1970s Claude Montana began laying the foundations for the female silhouette that would dominate the decade to come: broad, padded shoulders and narrow hips for garments that gracefully followed the body's movements. Like Azzedine Alaïa, he made extensive use of leather, usually black. It was he who introduced sadomasochistic dress codes into the luxury field: the 'Montana woman' was a 'femme fatale', seductive, dangerous and always highly sophisticated. In his fashion parades Montana underscored the dramatic side of his work with skilled lighting effects.

Here Montana uses the black grain de poudre and satin of the traditional tuxedo. As in the Saint Laurent versions, the straight trousers elongate the silhouette. By contrast, though, the jacket is rounded to make the hips more feminine and its construction is now totally unrelated to that of the man's suit. The garment represents a return to the skilful cutting of the 1950s, which reduced seams to a minimum: thus the 'kimono' sleeves do not require seams that would break the surface of the jacket. The asymmetrical treatment of the open, wrap-around collar is especially typical of Montana's work, as is the parchment-like scroll of the bottom of the vest, where the black satin lining becomes as ornamental as the collar. This exaggeratedly feminine tuxedo was worn with a black turtleneck, black gloves and black suede shoes. A luxury lounge lizard outfit disguised as evening wear. 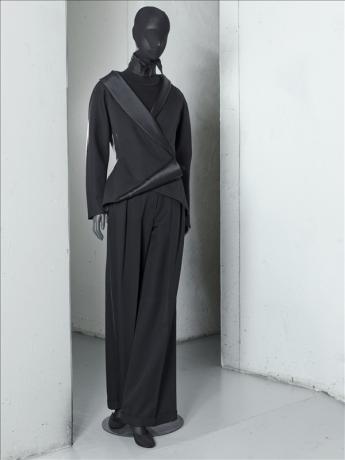