'It had to contrast with the colour of the coat. Most often it was white, with coloured silk embroidery. The quantity of embroidery increased over the years. At first it had only been used for edging, but then it spread to the ground. It took the form of scattered bouquets or garlands of flowers. Then people tired of mere ornament and demanded narrative subjects from the embroiderers.'

These sumptuous waistcoat decorations were very fashionable in the 18th century; the embroiderers created them using cartoons made by draughtsmen often trained in the free drawing schools established in many French cities – notably Lyon – in 1756. Once accepted by the manufacturer or the client it had been offered to, it was copied onto pricked paper then reproduced on a fabric sample.

These cartoons were produced in great quantities and many of them have survived. The Palais Galliera collection includes 200 waistcoat embroidery models, comprising floral decorations, genre scenes, Chinese and Turkish scenes, rustic scenes and narrative subjects. 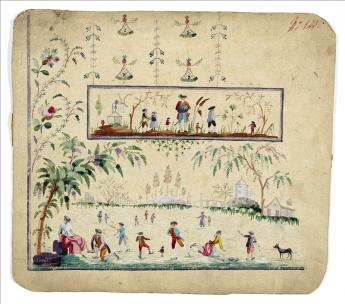