Waistcoat worn by Claude Lamoral II (1685–1766), Prince of Ligne and the Holy Empire

This sleeved waistcoat belonged to Claude Lamoral II (1685–1766), Prince of Ligne and the Holy Roman Empire. He was the father of Charles-Joseph Lamoral (1735–1814), 7th Prince of Ligne, a friend of Marie Antoinette and a famous memoirist. Owners of a château at Beloeil, in what is now Belgium, the family was received in all the courts of Europe.

The history of this waistcoat's textile ornamentation is at once well known and mysterious. The design resembles one by Anna Maria Garthwaite, an Englishwoman who worked as a designer for the silkweavers in Spitalfields, in London. Three other waistcoats with the same kind of woven embellishment are known: one at the Metropolitan Museum of Art's Costume Institute in New York; another at the Palazzo Mocenigo in Venice; and the third also at the Palais Galliera. This example and the one in Venice are very similar in their background decoration and a floral design thicker and more exuberant than the English version. Astonishingly similar, these four waistcoats make up a remarkable group of aristocratic garments, but the Galliera model stands out for its illustrious provenance. 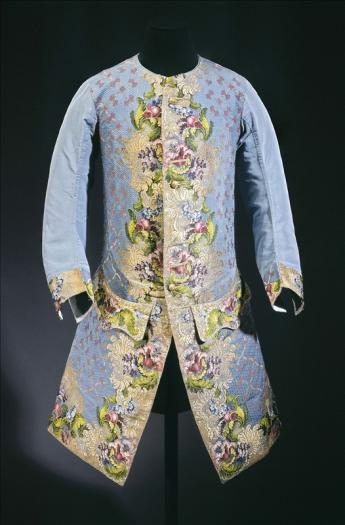