In the 1860s skirts had sometimes imposing trains, supported by 'projected' crinolines petticoats that considerably increased their rear volume. This made them ill suited to outdoor activities such as rural lunches, country walks and trips to the beach. To prevent staining by contact with the ground, dressmakers created a method for raising skirts by pulling on two buttons connected to an ingenious system of strings. However these raised skirts made the petticoats visible and were considered too indecent to be worn in elegant society.

Women on holidays happily wore a practical 'petit costume', often with a matching jacket or paletot, as seen here. Loosely cut, this somewhat formless garment was much more convenient and comfortable than the standard bodices. In fashion from 1862 onwards, the paletot – of which few examples have come down to us – was in fact adapted from a popular style of man's jacket. Influenced by English trends and in search of more comfortable outdoor styles, Second Empire women were quick to adopt the paletot, which foreshadowed both the suit – invented around 1885 – and more generally the sportswear vogue of the following century. 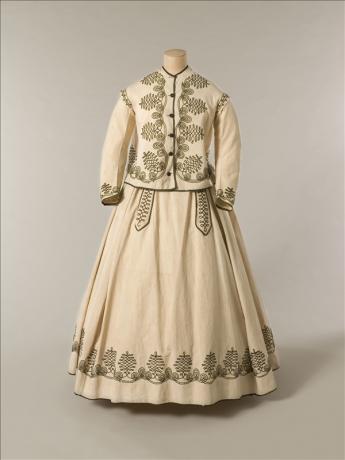