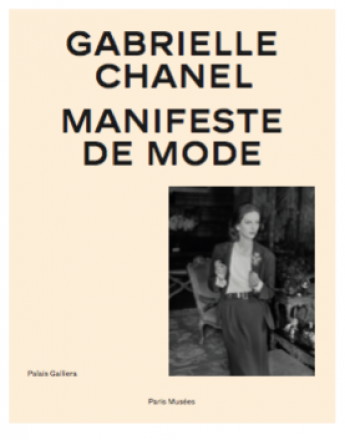 EDITORIAL by Miren Arzalluz,
Director of the Palais Galliera and curator of the exhibition :

Gabrielle Chanel devoted her long life to creating, perfecting and promoting a new form of elegance based on freedom of movement, a natural and casual attitude, a subtle chic far from extravagance, a timeless style for a new woman. This is his "fashion manifesto", an inescapable and more than ever relevant heritage that the Palais Galliera presents today.

From the beginning of her career, in the early years of the 20th century and until the end of her life, Gabrielle Chanel rose up against the fashion imposed by her time. In her youth, Gabrielle Chanel reveals herself as a woman dandy, who goes from appropriation to the creation of clothing interpreting for women the comfort, functionality, sobriety and elegance of the male wardrobe. Through in-depth technical experimentation, reinterpreting the traditional tailor's craft while using highly supple fabrics such as jersey and tweed, she imposed her version of the suit and the little black dress in the 1910s. In the 1950s, they became symbols of a different kind of femininity on both sides of the Atlantic. Chanel developed its own recognizable and timeless style, which persists in the face of the ephemeral expressions that characterize fashion.

Chanel's style lies in the principles of comfort and respect for the female anatomy, but also in the details and chic elegance of its proposals. Refusing superfluous adornment, Chanel always makes a fair and audacious use of colours, materials and techniques, favouring balance and a harmonious vision of the whole. To the sophisticated sobriety of her clothes, she contrasts the opulence of her jewellery - inspired in particular by ancient or distant civilizations - with the way she wears them in abundance. Her perfume N° 5 will be a milestone in the history of perfumery, from its creation in 1921. This iconic perfume became the invisible but essential accessory for the modern woman.

Gabrielle Chanel became a legend during her lifetime, a legend that she herself wove and helped to develop throughout her career. As early as the 1930s, the French and international press echoed numerous biographical accounts that only served to accentuate the confusion deliberately maintained about her life and the fascination that her character already aroused.

Since his death in 1971, numerous writings have attempted to shed light on the different facets of his history and personality. All these works have sought to unravel the mystery of his origins, the keys to his success, his exchanges with the artistic scene as well as his sentimental relationships, and more recently, his conduct during historical events and in particular during the Second World War. All this has contributed to a better understanding of the complex personality of "Coco" Chanel, while at the same time provoking debate and controversy.

As a museum dedicated to fashion, we have chosen to focus the exhibition on the work of the seamstress, who became one of the most influential fashion designers of the 20th century. The exhibition Gabrielle Chanel, Manifeste de mode, the first retrospective dedicated to the designer organized in Paris, aims to analyze her professional career, the birth and evolution of her style, the characteristics of her work, her codes and her contribution to the history of fashion.

This catalogue is on sale at the Palais Galliera's bookshop.

If you would like to order it, we recommend you these web sites bellow :
• La Boutique des Musées for the French version : www.boutiquesdemusees.fr
• Thames & Hudson for the English version : thamesandhudson.com