150 YEARS OF THE PARIS COMMUNE

As the City of Paris commemorates, from today, the 150th anniversary of the Paris Commune, the Palais Galliera invites you to revisit this dark episode in the history of Paris through an investigation conducted a few months ago in its reserves.

Last December, the Palais Galliera welcomed forensic doctor Philippe Charlier and his students to carry out a study of one of the little-known treasures in the collections of the Musée de la Mode de la Ville de Paris, combining forensic techniques with the history of clothing, as part of the 150th anniversary of the Paris Commune.

In July 1870, Napoleon III declares war on Prussia in a turbulent social context. In six weeks, France suffered a series of defeats on its own territory, and Napoleon III was imprisoned by the Prussians on 4 September 1870 after his defeat at Sedan. Paris was besieged, but the Parisians resisted repeated attacks until the government agreed to an armistice on 28 January 1871.

New elections were then held, bringing to power a majority royalist assembly, governed by Thiers. This new government settled in Versailles, not in Paris, where the climate was tense. A feeling of betrayal animated the less well-off social classes, who had been resisting for several weeks.

On 18 March 1871, the Parisians rebelled against the new government. This was the beginning of the Paris Commune, which lasted 72 days and ended with the "Bloody Week" from 21 to 28 May 1871, marked by numerous executions. 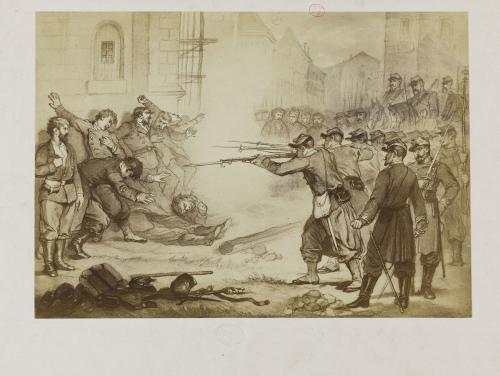 "Execution under the Commune"; Collection of the Musée Carnavalet-Histoire de Paris

The object of the study carried out by Dr Charlier's students is a suit of clothes that belonged to Louis-Bernard Bonjean (1804-1871). He was one of the victims of the Paris Commune in May 1871: as the first provisional president of the Court of Cassation, he was shot on the Place de la République in reprisal for the execution of communards.
Part of his wardrobe is preserved in the reserves of the Palais Galliera, including the three-piece black wool suit he wore on the day he was executed by the Paris Commune on 24 May 1871. Riddled with bullet holes, this suit is one of the rare testimonies of this dark period in the history of Paris. 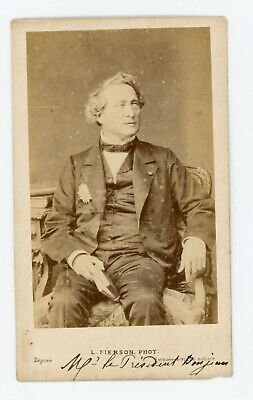 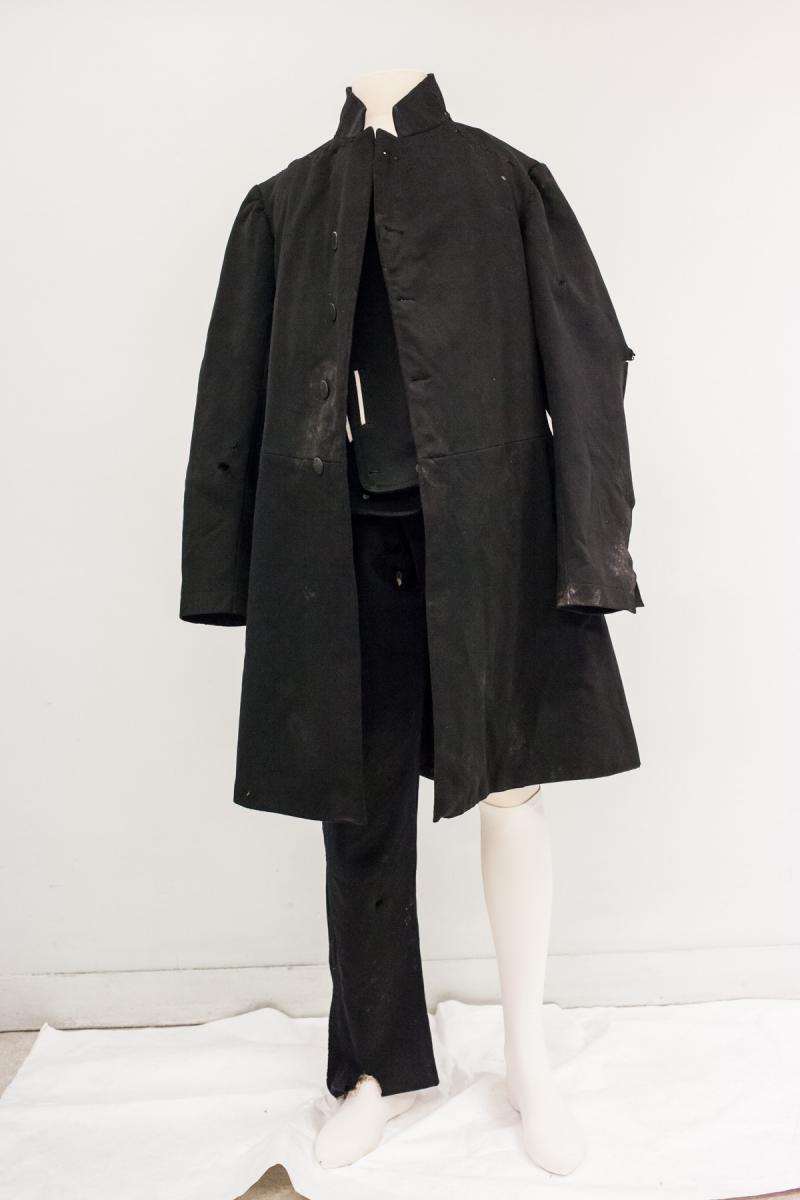 The scientific group of the "Forensic Anthropology Techniques" diploma of the University of Paris-Saclay met in the storerooms of the Palais Galliera in order to carry out a forensic analysis as well as a ballistic study of the garment, on a mannequin or an examination table. In the manner of a crime scene where the clothing replaces the body, the ballistic lesions were reconstituted from the entry and exit orifices, completed by secondary toxicological analyses at the CHU Lariboisière laboratory, and by microscopic analyses at the Quai Branly-Jacques Chirac Museum, where Doctor Charlier heads the Research and Teaching Department. The calibre of the weapons used, the angles of attack, as well as the list of organs potentially affected, thus allowed an anatomical and clinical 3D reconstruction, before formulating hypotheses on the impacts involved in the victim's death. 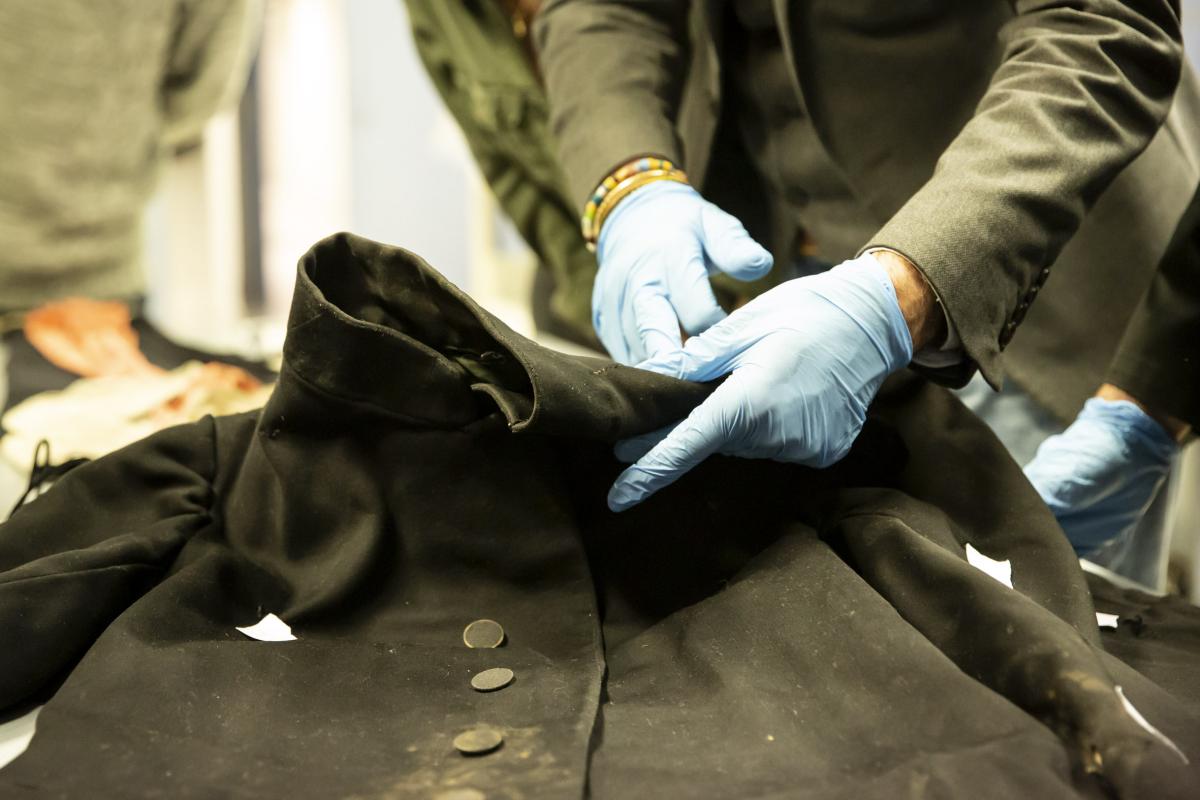 President Bonjean's suit in the hands of Dr Charlier, December 2020

The scientific report has just been published, on the occasion of the 150th anniversary of the Paris Commune, and the conclusions are fascinating. The autopsy confirms the few testimonies written about this execution: the available historical accounts describe a shooting by a platoon of volunteer communards present at the scene, motivated by a feeling of injustice and revenge. The state of Louis-Bernard Bonjean's clothing and the laboratory analyses reinforce this image of a multiple shooting, with different shooters, with numerous shots hitting the whole body as well as the victim's head (which was probably hit post-mortem by a final shot).

This report thus highlights the importance of biomedical examinations, particularly forensic ones, in the exploration of ancient artefacts, the results of which provide indispensable elements in the understanding of the context of this significant episode in the history of Paris.

This project is part of the research policy that the Palais Galliera is committed to developing in close collaboration with higher education institutions (Parsons School, the University of Paris IV, the INP) and other national museums (in this case the Musée du quai Branly - Jacques Chirac).