Wife of fashion designer Paul Poiret, Denise Poiret is seen here in the Mythe dress she wore to a soirée at L'Oasis, the glamorous Paris nightspot. The photograph was taken in the salon of the Poiret fashion house at 26 Avenue d'Antin; the striped wallpaper, dotted with bouquets of flowers, is a creation of the Ateliers Martine. Behind her is Brancusi's sculpture 'Bird', bought by Paul Poiret in 1912.
Muse as well as model, Denise Poiret was a living advertisement for her husband, who used her as the prototype figure for his Empire line dresses. 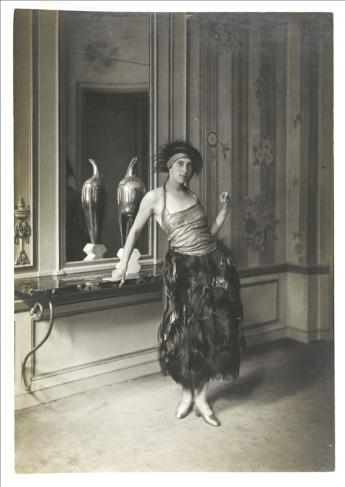