René Gruau started out as a fashion illustrator in 1924 and began working for the Italian magazine Lidel in 1926. He went on to work for French magazines including Fémina (from 1935), Marie Claire, Chapeaux-mode, L’Officiel de la Mode et de la Couture and Silhouettes, notably taking inspiration from the work of his couturier friends Christian Dior and Jacques Fath. In 1947 he began to focus more on advertising, working with luxury Paris establishments in the fields of haute couture, accessories, lingerie, perfume and cosmetics. One of his earliest advertising illustrations, dating from 1947, was for Christian Dior's Miss Dior perfume.
In 1949 Gruau designed his first poster for Rouge Baiser, the lipstick created by Paul Baudecroux in 1927; Rouge Baiser was said to be extremely long-lasting – even kiss-proof! – and this initial image showed a red-lipped, blindfolded blonde. In a number of subsequent versions – the Palais Galliera has an original drawing for one of them – he featured the sophisticated, elegantly sensual woman who was one of his favourite subjects. The style here is typical: the contrast between white paper, black ink and a vivid touch of colour, solid areas of colour (in this case the black hair), clarity of line and an impression of movement. 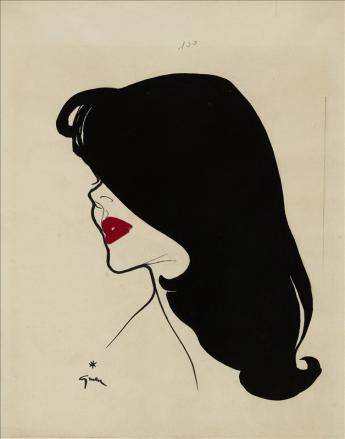