The term "evening ensemble" suddenly sounds obsolete when applied to this outfit by Thierry Mugler, more evocative of nights at the Palace Club than of a traditional society event.

From 1978 through the early 1980s, the Palace, where the waiters wore Mugler-designed uniforms, was the focal point for the fashion world and, in a way, its workshop.

This silver lamé trouser suit testifies to the precise, structured, spectacular style of a creator who drew unhesitatingly on big Hollywood productions and the glamour of their stars. He turned fashion into a pageant and, like other couturiers and designers of the time, became a star in his own right. In one logical outcome, in 1977, three years after the founding of his company, he turned the fashion show into a spectacle; and in 1984, at the Zenith in Paris, 6000 people attended the supershow marking the Mugler label's tenth anniversary. 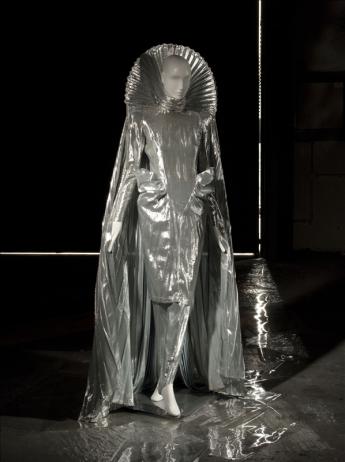