A notable feature of female fashion during the Romantic era was the complexity of the hairstyles and hats: women's heads bore elaborate structures of tuffs, curls and braids, sometimes topped with a comb. Current events often influenced fashion and in 1827, when Zarafa, the giraffe given to Charles X by Mehmet Ali, viceroy of Egypt, arrived at the Jardin des Plantes menagerie in Paris, a wave of 'giraffomania' swept through the world of clothing and accessories. For the next three years startlingly tall 'Giraffe' hairstyles and combs were an enormous success. This comb, whose peacock feathers and clover suggest the embellishments of the hats and turbans of the time, is a majestic example. 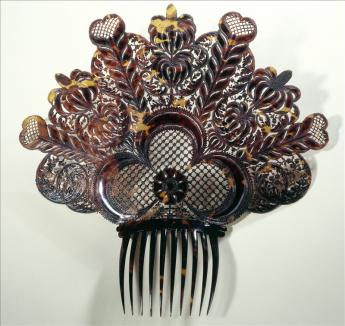