The milliner Madeleine Panizon – real name Madeleine Buisset – set up shop on Rue Ponthieu in Paris in the 1920s.

Although little spoken of in the press, she was highly reputed for her daring and originality, supplying clients like the Marquise de Lubersac with a range of headwear, including helmets trimmed with tassels, embroidery and silver buttons or topped with porcupine-like spikes. When she showed at the International Exposition of Modern Industrial and Decorative Arts in 1925 she took out the prix d'honneur with this aviation/driving hood 'in ruby Duvetyn, with silver studs, covering the neck and ears', as it was described in L’Art et la Mode of 4 July of that year. She donated the piece to the Musée Galliera in 1958.

Her reputation was such that Paul Poiret commissioned her to provide the accompaniment for his dresses when he closed his own millinery workshop in the early 1920s. In return she gave the great couturier all her boldness and talent. 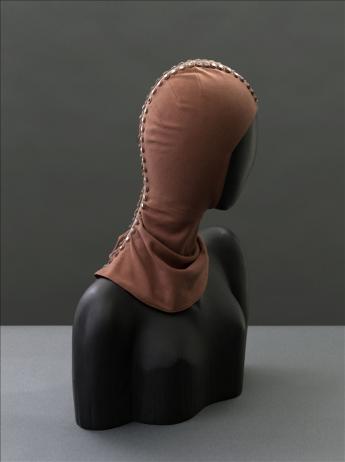