On 1 January 1710, Jean Marius obtained a five-year royal privilege for his invention of a 'folding pocket parasol-umbrella'. During this period every umbrella made in France was to carry his trademark, but after his five-year monopoly anyone was free to manufacture similar ones. In a letter of 18 June 1712 the Princess Palatine made mention of this remarkable invention, the 'expeditious parasol-umbrella that can be carried everywhere, in case you are caught in the rain while out walking'.

The museum has two of these extremely rare Marius-system umbrellas dating from the early-18th century; since neither bears Marius's mark, we can assume that they were made after 1715. 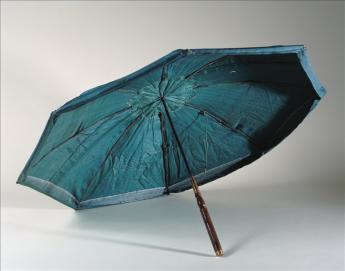