Jacques Heim (1899–1967) began by taking over the fur business started by his parents, who had come to France from Poland in the 1920s. He worked with Sonia Delaunay and the two opened their 'boutique simultanée' during the International Exhibition of Decorative Arts in Paris in 1925. Mainly a supplier of fur and leather items at first, Heim only took up couture seriously in 1930, designing day and evening dresses whose complex cut caught the public eye.

When the Second World War ended, he joined the innovative movement initiated by Christian Dior, developing a pronounced taste for the overt asymmetry to be seen in 'Fracinelle', this midnight blue taffeta day dress whose skirt opens to reveal two black and white striped taffeta petticoats. 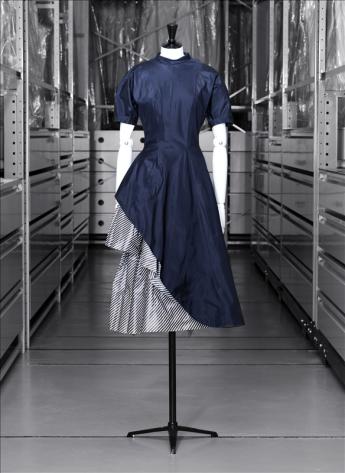