Increasingly popular in the second half of the 17th century, cotton dressing gowns were known in France as indiennes, a reference to the Indian provenance of the painted and dyed fabrics imported by the French East India Company.

This kimono-style dressing gown testifies to the role played by Holland in the European craze for this kind of garment. Holland was the only country allowed to trade with Japan and the Shoguns customarily offered 30 kimonos to Dutch officials when trade treaties were signed. The ornamentation of this dressing gown mingles the pines and plum trees that were often associated with bamboo in evocations of the qualities of a gentleman. The 'Indian cotton' used was made in India for the Dutch market. The Dutch seem to have been particularly fond of this decor, as several examples are to be found in their museums. This dressing gown is proof that in terms of textiles and clothing, a successful pattern could go on being reproduced. 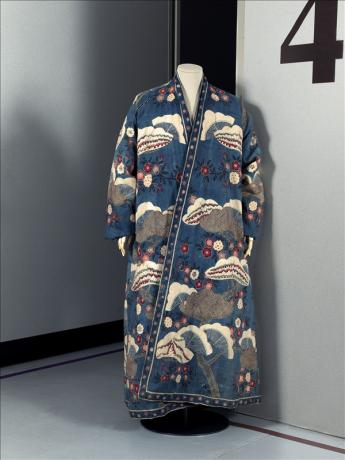