This dress belonged to Denise Poiret, the couturier's wife and favourite model.

Here we have a real expression of Paul Poiret's determination, declared in 1906, to do away with the tyranny of the corset. The fabric is sober and the dress signals Poiret's highly personal way of adapting the same model to day and evening wear: this model is identical to the pearl-embroidered satin 'Lavallière' dress worn by Denise Poiret to the Paris premiere of Diaghilev's Scheherazade in June 1910. An ivory and purple version can be found in the Musée de la Mode et du Textile in Paris.

An interesting feature is the wide, draped belt with its vertical row of buttons. Poiret made this dress from a tablecloth with geometrically patterned edges which he brought back from Russia in 1911 – an exercise in tweaking that is further evidence of the modernity of a couturier who really began to bloom in the 1910s. 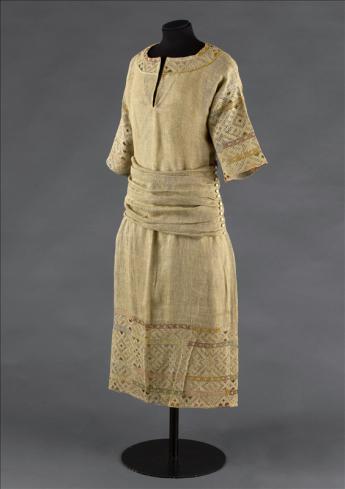