This undergarment is rarely found in museum collections. Its unusual structure of overlapping strips and laces makes it a challenge to fit it on a dummy and restore its original shape. Worn over a long chemise, this undergarment replaced the conical stays of the ancient régime: it provides support, but unlike the traditional model is left unboned, and does not give a conical shape to the waist. After the French Revolution, old silhouettes were rejected completely, and clothing became inspired by those of antiquity: dresses were usually made of pleated cotton or linen, with the waistline ending just under the bust.

The required support is obtained from the way it is put on: from the securing point beneath the bosom it goes around the waist and then over each shoulder. In the interests of a close fit, straps cross at the back and are tied together at the waist. Thus the undergarment provides support like modern pushup bra, surrounding the upper body with a ribbed fabric that opens out towards the top via a system of gussets. The resulting body shape also suggests the fashionable silhouettes of a century later. The fluid shape known as the "Empire" line, which originated during this time period as a result of the French Revolution, was notably practiced by couturiers like Paul Poiret in the 1910s. 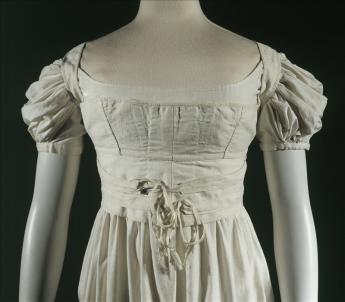