Born in Arles in 1951, Christian Lacroix always dreamed of being a great couturier. From a very young age, he covered his notebooks in fashion history drawings. In kindergarten his passion for paint had led him to drink it! Later he discovered theatre and movie costumes, which he wanted to correct himself. Exuberance is a tool of Lacroix, like his scissors. In working at the fashion house of Jean Patou from 1981 – 1986, and then in taking over the house in 1987, Lacroix inherited this luxurious and dreamlike approach to couture. Passionate about history, which he sees as something multi-faceted, Lacroix juxtaposes the influences of different centuries on the same design. Under him, these influences become a sort of automatic, stylistic handwriting.

'Coup de roulis' is a perfect example of this modus operandi: the shape of the long, generous skirt – in all seven metres of yellow and black fabric from Bucol – is evocative of the 19th century, while the motifs are reminiscent of the large patterns dear to Charles Frederick Worth, the founder of haute couture. By contrast the short-sleeved pullover, hand knitted with chenille lurex wool of the same colours, adds a contemporary touch that situates its creator at the end of the century – the 20th century, that is. 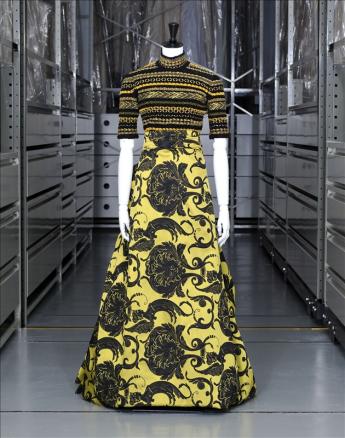