Presented on October 4, 2002, the "Irère" collection is enriched by a film by John Maybury shown during the parade: the story of a girl shipwrecked at the end of the 16th century who swims to the shores of French Guyana. She then lives in the jungle, undergoes the invasion of the conquistadors before dressing in the feathers of the costumes of the indigenous peoples, then a symbol of freedom and innocence. The name "Irere" comes from the Amerindian "jerere", referring to the Surinamese bald duck.

This short dress, the last passage of the parade, thus corresponds to the end of the collection, elaborated around the shimmering colours of the tribes and birds of Amazonia. The printed muslin, with its drapes fixed by folds and twists, is inspired by the plumage of the red Guyanese macaw, while its asymmetrical edges and clean-cut sides recall the jungle and the violence of the story at the source of the show. 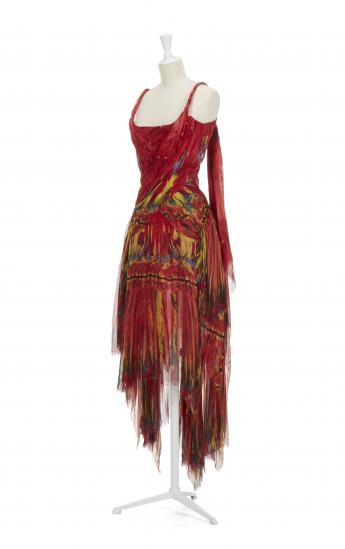