One of the British designer's most resounding collections is taking place for the spring-summer 2010 season. Entitled "Plato's Atlantis", the fashion show prefigures a post-apocalyptic world, engulfed by global warming and in which the human species is mutating for its survival.

This fashion moment illustrates the second and final creative phase of the couturier. He wants to start from a new base by reinventing shapes and silhouettes. Their diffusion evolves: this is the first fashion show presented live on the Internet. However, "Plato's Atlantis" will be his last collection of women's fashion during Alexander McQueen's lifetime, before his death in February 2010.

The print of this dress, snakeskin tangled in anamorphosis on satin and organza mixed together, evokes the theme of mutation. The cut of the sleeves and skirt, bubbled by numerous darts and volutes supported by bands of horsehair, is emblematic of the research for new shapes pursued by Alexander McQueen throughout his career. 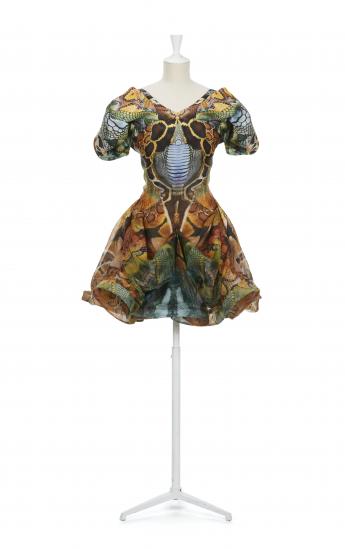