True to the designs of John Galliano, the jacket is surprisingly technically complex: the chalk calf leather is entirely constructed with clamps towards the outside. The whole ensemble is then completely folded up with black tulle, as if the back of the garment, which is usually hidden, was revealed and ennobled. The buttons, adorned with wheels inspired by those engraved on the pillar of King Ashoka (3rd century BC) in India and a symbol of Buddhist doctrine, reveal the mix of cultural influences dear to Galliano.

This set is a testimony to the unusual fashion show imagined by Galliano for the spring-summer 2006 collection, made up solely of models in couples with opposite or surprising physiques (twins, dwarf people with giants, fat and thin people...). The suit that opened the parade was worn by a woman in her sixties, alongside a man in his twenties. 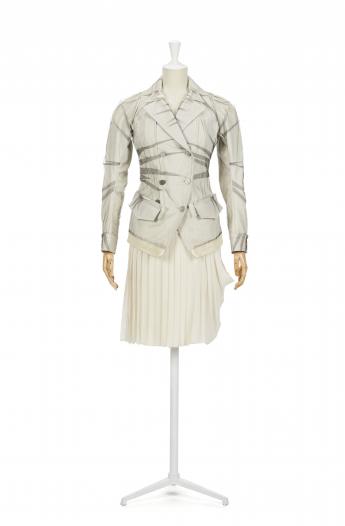