He's been making clothes since 1970 and he founded his label in 1972, but Yohji Yamamoto didn't begin showing in Paris until 1981. Like his compatriot Rei Kawakubo, he entered the media spotlight in 1983: his clothes – pared down, black, seemingly wearied by use – had a poetry that chimed with the Comme des Garçons unfinished look, and it was then that talk began of a Japanese school. Their joint contribution to the fashion of the 1980s was nothing short of an aesthetic revolution; in the 1920s people had referred to Chanel's 'luxurious poverty', and Yamamoto had given the notion a contemporary twist.

Interestingly, he has always rejected the 'Japanese designer' label: his work is based on the Western wardrobe and when he references traditional garments or pays tribute to the great figures in fashion history, he offers a detached interpretation that gives his creations an unexpected relevance.

This velvet leather ensemble is astonishing. Yamamoto's approach to the conventions of the Western silhouette – hoop dresses and crinolines, for example – is endlessly challenging. In this piece he brings together the extremes of the history of costume: the hyper-sophistication of an 18th-century or Second Empire court dress combined with kid skin that has kept the shape of the animal. Here two radically opposed ways of dressing – the prehistoric and the regal – meet in a wedding of nature and nurture. 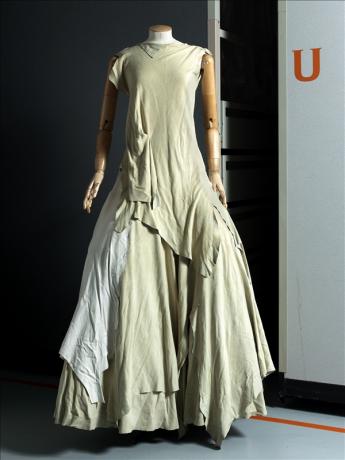