'The village girl restored to her parents by Sergeant Gillet'

Topical events were often the subject of waistcoat ornamentation in the 18th century, and two cartoons at the Palais Galliera recount the adventure of Louis Gillet (aka Ferdinand), a sergeant with the Artois Cavalry regiment. Having lost his way in the countryside, Sergeant Gillet hears the cries of a young woman attacked by two bandits and tied to a tree. With no thought for his own safety, he sets upon her assailants, wounding one on the cheek, cutting off the other's hand and causing them to flee. After untying the girl from the tree he escorts her back to her parents' home.

As a gesture of gratitude the father offers his daughter's hand in marriage, but the Sergeant declines on the grounds that at the age of 70 he could not be a good husband to her. A man of honour, he also refuses an offer of money. This event was the subject of numerous engravings after 1785. The Palais Galliera cartoons seem directly inspired by two hand-coloured engravings by Martial Deny, dated 1786 and held in the Musée de la Révolution Française in Vizille, in France's Isère département. In the engravings the two scenes – 'Sergeant Gillet', in which we see Gillet driving off the scoundrels, and 'The Village Girl Restored to Her Parents' – are treated identically. 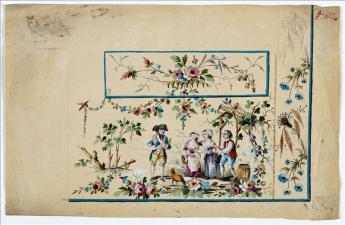