Humberto Leon and Carol Lim, Artistic Directors of Kenzo since 2011, announced their departure in June 2019. Famous for having relaunched the brand founded in 1965 by Kenzo Takada, they are signing this shimmering organza dress for spring-summer 2017, inspired by the dresses created by the Japanese designer for spring-summer 1977.

The print entitled by the house "Broken Camo" represents a revisited camouflage pattern ("camo" meaning camouflage in English), and is cut by khaki green, dark blue or more colourful patterns. The large dress buttoned with snaps on the sides and cape back is reminiscent of the cuts of some Kenzo garments from the early 1980s.

The prints, fundamental to Kenzo Takada's work, are faithfully reinvested in this flowing, easy-to-wear silhouette, just like the designs that made him successful. 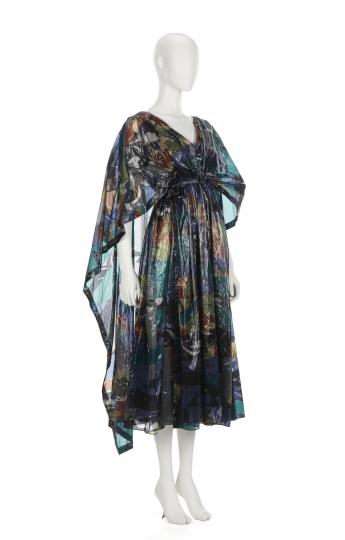