Born in 1883, Gabrielle Chanel opened her first hat shop in 1910 at 21 rue Cambon. In 1913 in Deauville, she offered for the first time flexible jersey suits which, as they did not require a corset, revolutionised women's lifestyles. The first fashion house was created during the First World War in Biarritz before opening in 1918 in Paris. A major figure of the inter-war period, she closed her house in 1939.

Faced with the triumph of corset fashion dictated by the new look proposed by Christian Dior in 1947, she reopened her fashion house and presented her first collection on February 3, 1954 at the age of 71. At the antithesis of her competitors, she presented creations that were supple, fluid, light and once again liberated women's bodies.

This trouser suit, then called "indoor pyjamas", was one of the first of its kind. Made for autumn-winter 1964-65, its gold fabric, another of Chanel's favourite colours, is hand-woven by Mahlia.

A major figure in the liberation of the female body, Gabrielle Chanel nevertheless condemned the wearing of trousers, which had been socially decried in the early 1960s. In creating these hostess pyjamas, made to be worn at home, in the evening or at dinner, the seamstress was amused by the success of her own about-turn in Elle magazine on 28 August 1964: "My pyjamas, they've only seen my pyjamas. I had done this for fun, to occupy a free tailor, to use a useless lamé. And now it's the revolution for three pyjamas".

This suit turns out to be one of the original prototypes of the collection. Its runway bolduc sewn inside it, with the name of the first designer (Mme Odette), the name of the mannequin on whose body it was made (Alexandra) and her number in the collection (39). This model was worn on the catwalk with a large gilded muslin coat and a gilded metal chain belt. 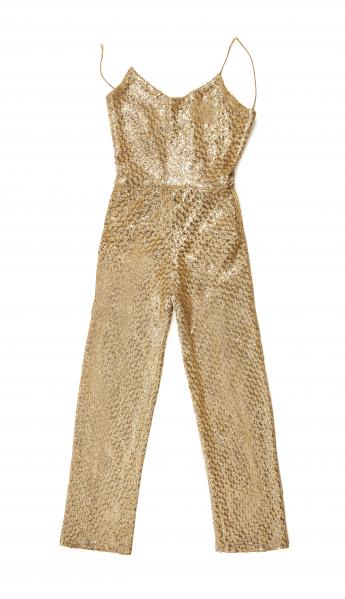