A graduate of La Cambre National School of Visual Arts in Brussels, Marine Serre won the LVMH Grand Prix in 2017, giving her the opportunity to create her own house thanks to the support of the financial group.

French born in 1991 in Brive-la-Gaillarde, she is inspired by the work of Martin Margiela, whose interest in recycling (in line with the contemporary interest of fashion for sustainable development) has been raised to the rank of haute couture, the diversion and choice of models of all ages and bodies as well as marginal fashion show venues.

Trained at Balenciaga with Demna Gvasalia, himself an admirer of Margiela, she takes from the former the radicality of her style, the colourful palette, the extensive use of elastane suits that mould the body like a second skin on which she drapes, as well as the inspiration of the street and popular styles. She adopts a crescent moon as her logo, pointing upwards.

This silhouette is passage n°17 of her spring-summer 2019 collection. Dubbed "Hardcore couture", this second fashion show and third collection is presented outdoors, on a bridge, at the jardins d'Eole in the 19th arrondissement. Among the scarf dresses or coats with key rings, the silhouette offered as a donation is the most popular by the media.

A mother (Inès Abdallah) was carrying her son (Naël, 3 years old) in a frontal baby carrier, both bodies sheathed in a jersey printed with red crescent moons on a black background. The sunglasses - technical sunglasses taken from those of the cyclists - contrast with her pumps with heels covered with a sock covered with the same crescents and whose thick sole is reminiscent of sneakers. Even the baby carrier is sheathed in the designer's logo jersey.

The silhouette is all the more interesting as it once invaded social networks in the form of a hijacking, a "same", a photograph taken and mass-produced on the Internet.  While Meghan Markle was expecting her first child, her head was placed on this silhouette of the parade and travelled around the world.

A contemporary ensemble emblematic of Marine Serre's approach, it also illustrates the importance that social networks have in the diffusion of contemporary fashion. 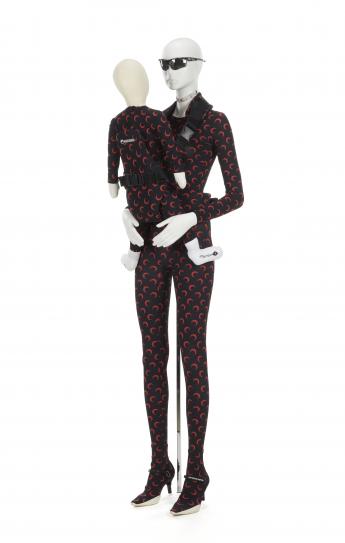