SWEATER AND SAFETY PINS, WORN BY JOHNNY ROTTEN OF THE SEX PISTOLS

Vivienne Westwood and Malcolm McLaren are the leading figures of the punk movement, a major British protest movement of the second half of the 1970s.

Together, they opened several fashion boutiques with the evocative names of Paradise Garage, renamed Let it Rock (1971-1974) and SEX (1974-1976), which offered as many vintage jackets emblematic of 1950s fashion as Vivienne Westwood's designs. Manager of the Sex Pistols, Malcolm McLaren dresses each member of the group entirely in them.

This sweater, worn by the group's singer, John Joseph Lydon, known as Johnny Rotten, bears witness to this. Its unstructured mohair knit, its bright colors in disorder and its two safety pins in the middle front make it an emblematic relic of both the punk movement and Vivienne Westwood's creation in the 1970s.

The influence of punk is omnipresent in contemporary fashion and this type of sweater will leave its mark on creators such as Martin Margiela, who created in the winter of 1991 a tribute sweater of the same blue, preserved in the collections of the Palais Galliera (GAL1990.325.1). 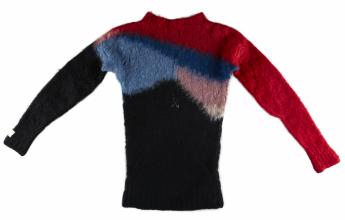